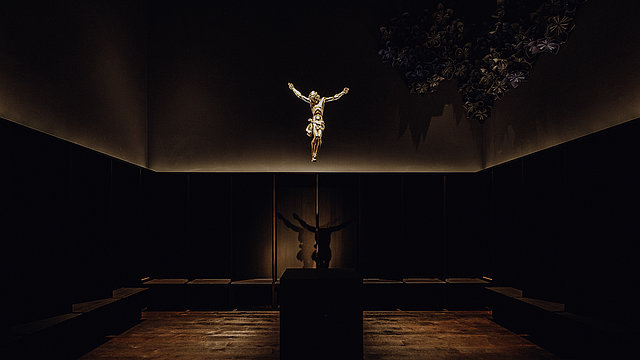 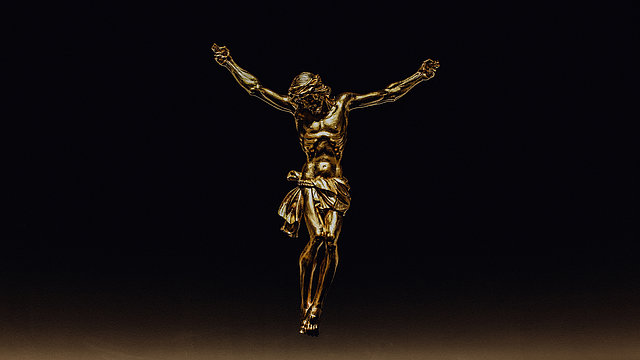 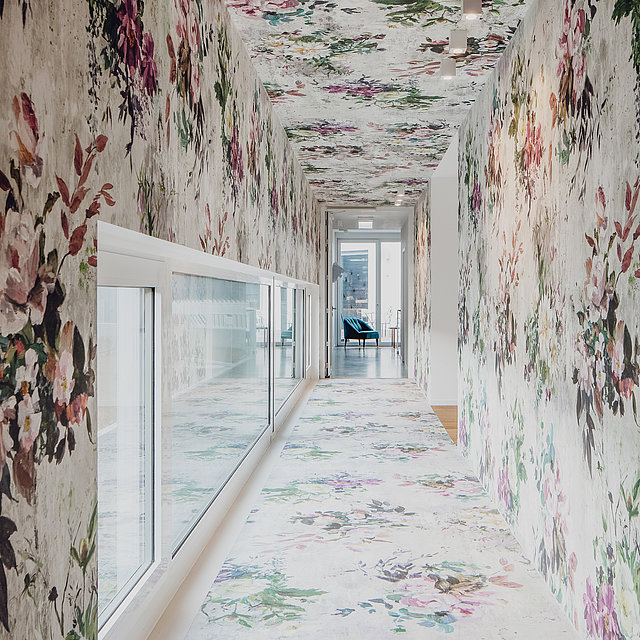 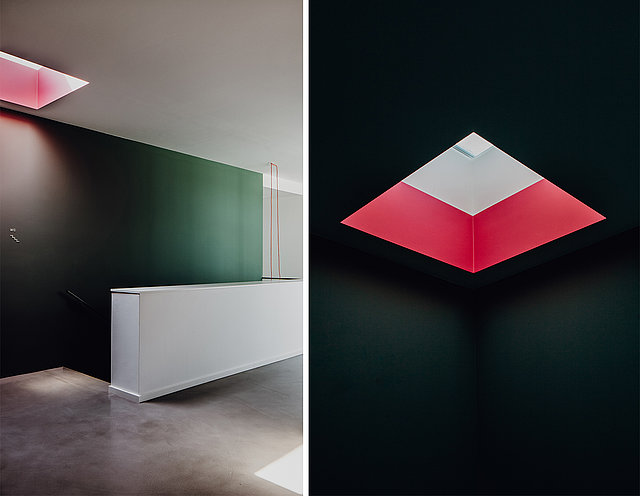 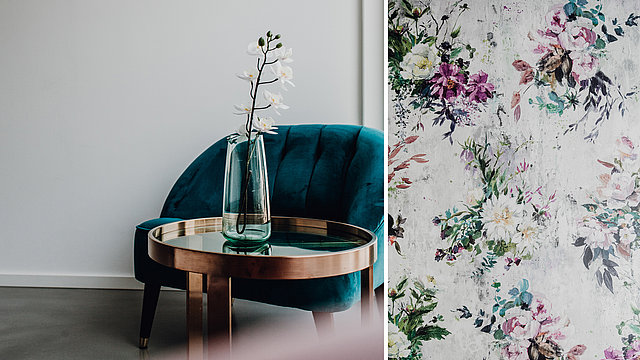 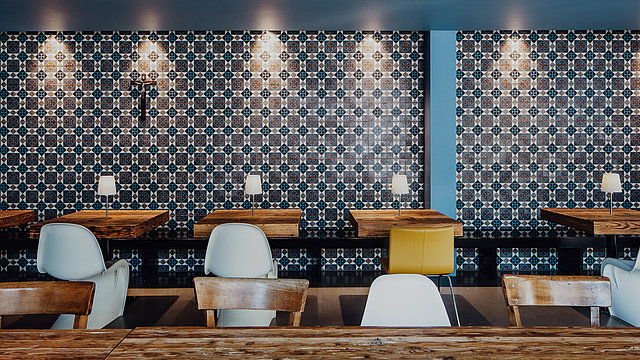 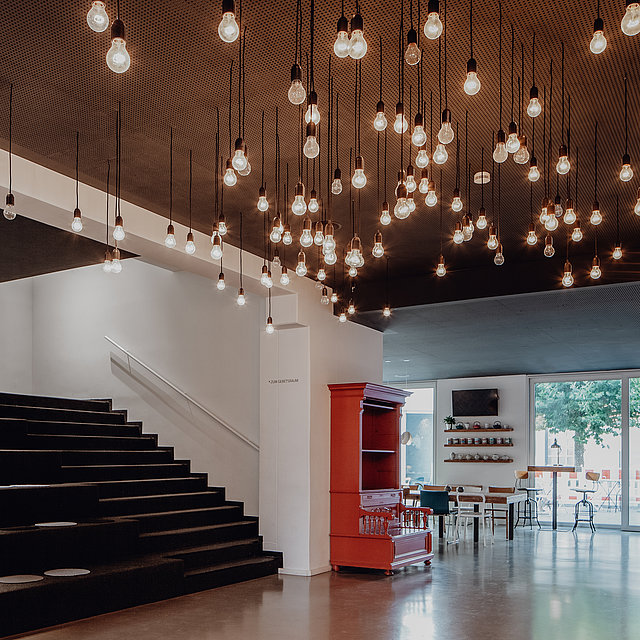 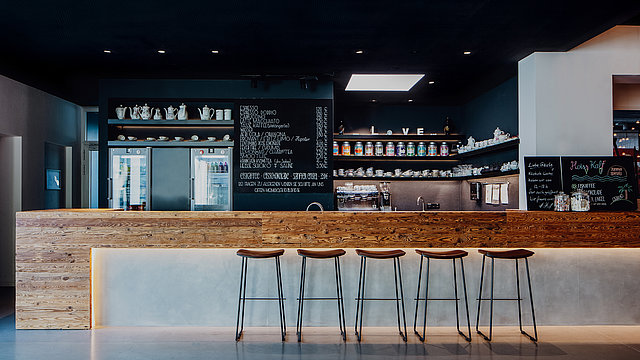 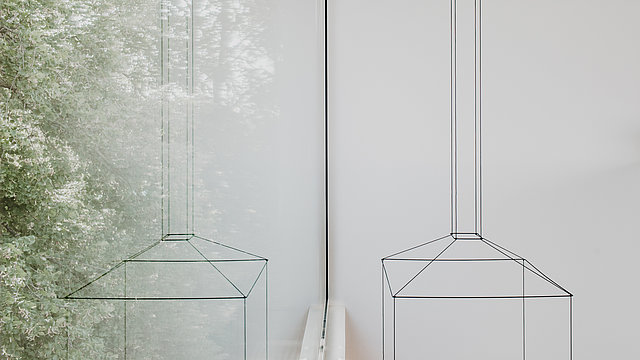 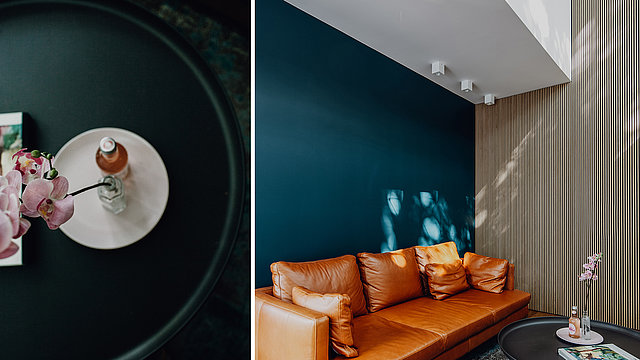 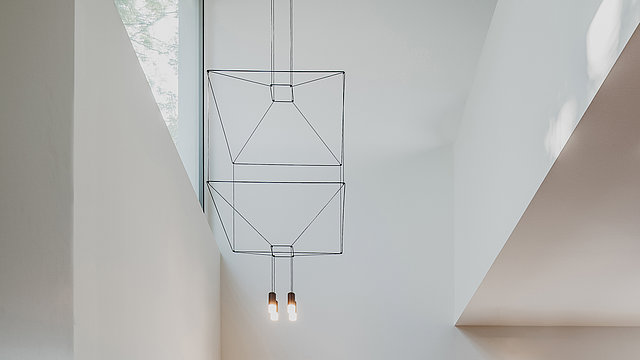 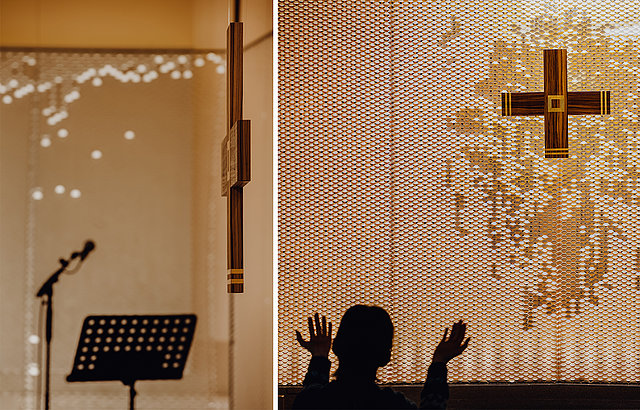 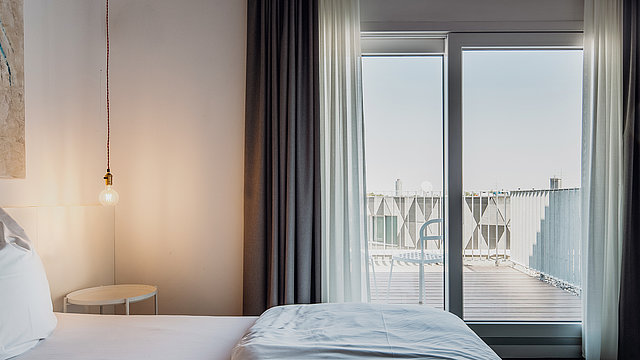 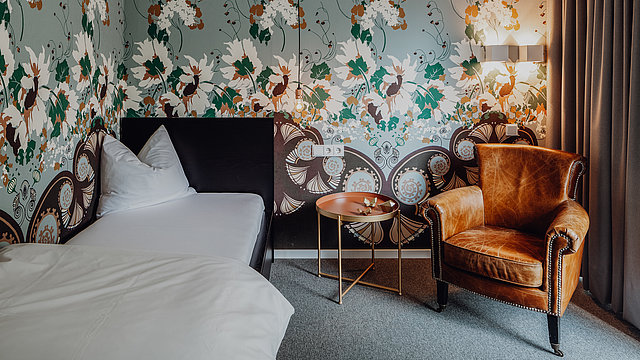 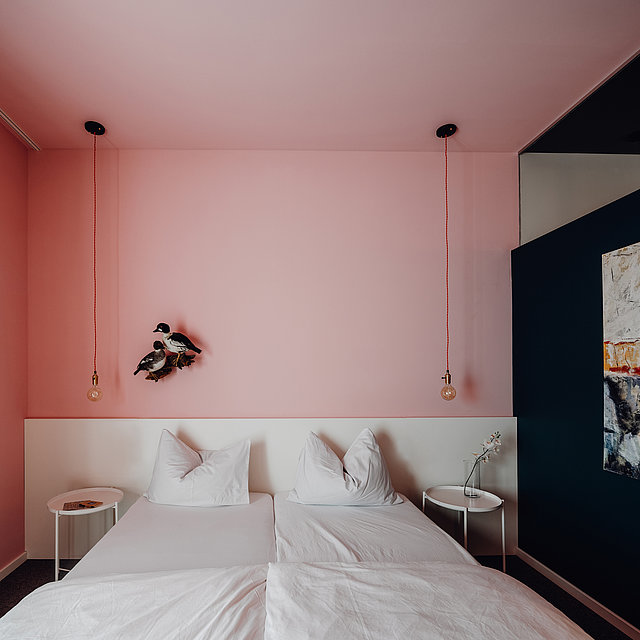 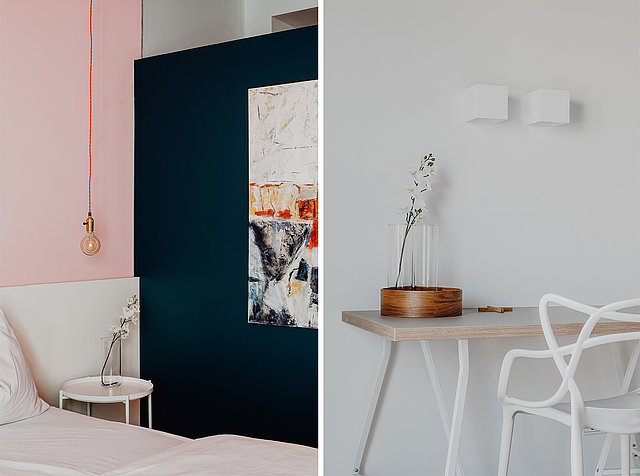 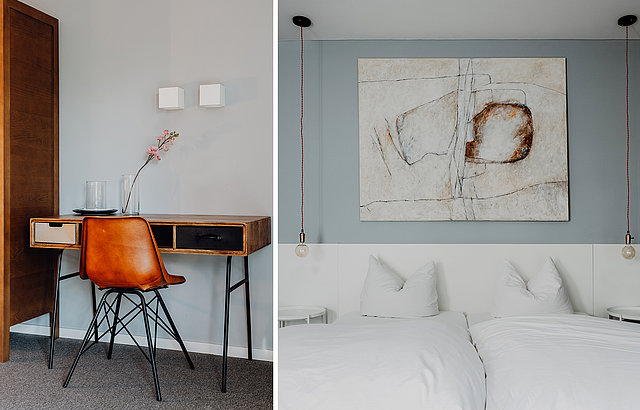 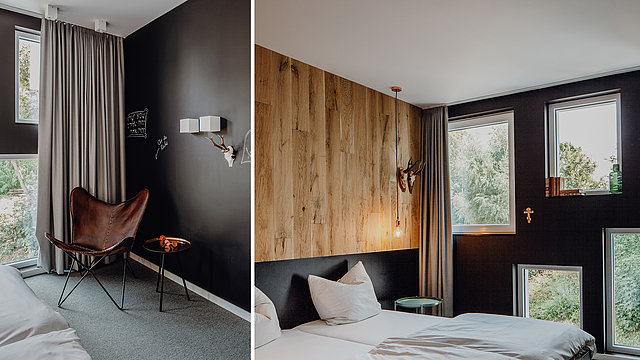 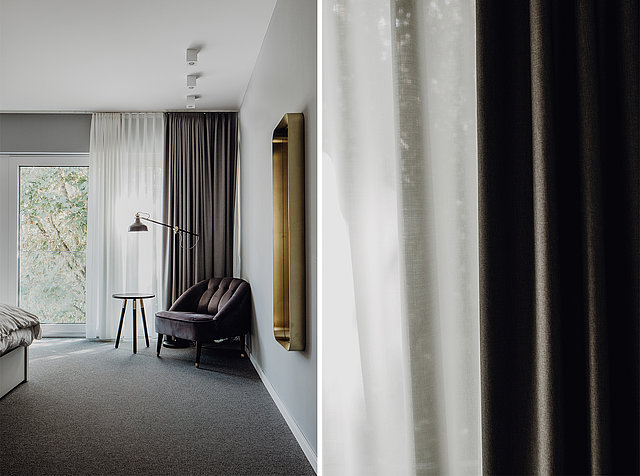 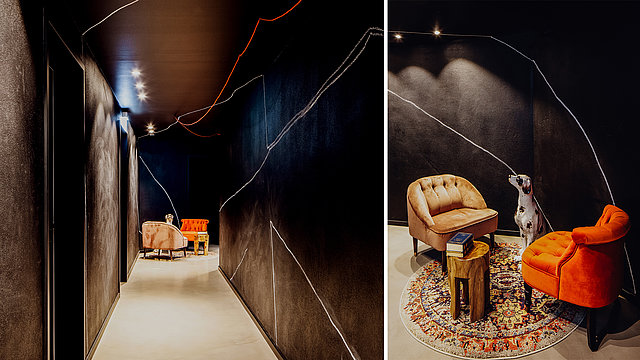 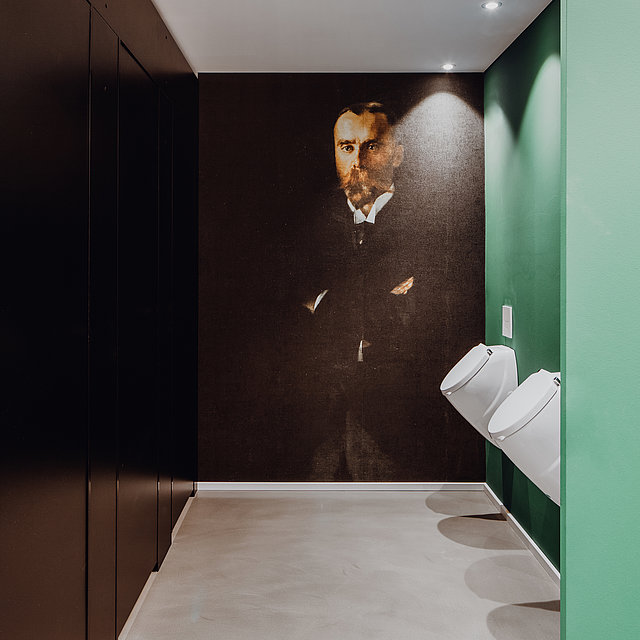 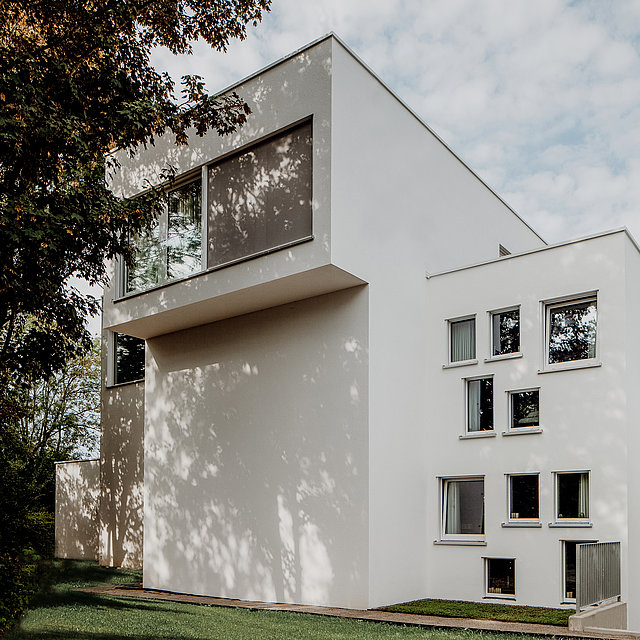 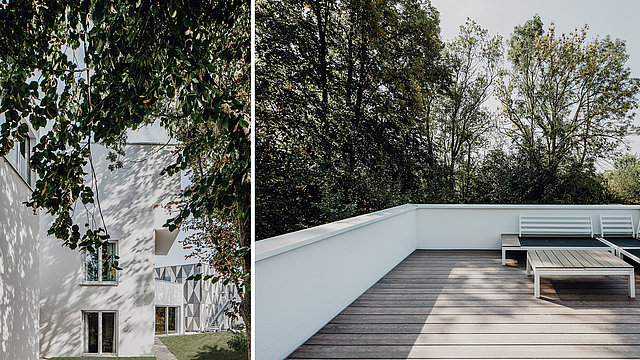 What would a monastery look like if it were reinvented and founded in our time?

This question probably best describes the unique nature and work of the prayer house in Augsburg. There, in the middle of an industrial estate, a beautiful and lively place of prayer has emerged from a dismal former fitness center, where prayers have been going on around the clock, day and night, for more than seven years without interruption. The current building complex has grown from the simple commercial block in two phases. In the first step, the old fitness center was converted into a prayer house. The interior layout has been reorganized and expanded to include a café. A second, recently completed construction project has added a guest house with so-called "Prayer Homes" and a chapel as a place of silence.

The heart of the center is the prayer room: "A space of light in which the prayer does not remain silent day and night. Decorated in white and warm golden tones, the prayer room radiates something supernatural. as if heaven and earth were meeting at this place. Each individual room was subjected to an individual design. Thus, a monotonous aging commercial property became a place of beauty and adoration sparkling with creativity.

The new construction of the second phase of the building, with its differently sized, differentiated white cubes, forms a counterpoint to the clear geometric shape of the existing building. The modern wallpaper shows that it is not only suitable for the design of interiors, but that it can also make for a lively exterior wallpaper facade of this building.

The "Prayer Homes"- guest rooms in the white cubes allow temporary living. Similar to a monastery, the prayer house offers its guests the opportunity to take a break from everyday life for a period of their own choosing in order to seek the presence of God in prayer and contemplation. Every single "Prayer Home" has its own individual design theme. The basis for the room design were each the pictures and works of art, from which the respective color selection,often extravagant but harmonious has been derived. From the pink, blue room with a stuffed duck over the sage green, black room with the many windows to the so-called "Episcopal Suite" in elegant gray with a view of the mighty treetops of the garden, the range extends.

Not only do the guest rooms impress with their individuality and partly exotic interior design, but also in the remaining parts of the building there are always surprising and unexpected scenarios: The way leading to the rooms, for example, through a flower corridor, whose floor, walls and ceiling are decorated with floral motifs and form a kind of flower tunnel.

The prayer-room, shrouded in bright gold and white, filled with lively, loud prayer day and night, faces a cube-shaped, all-black chapel as a place of silence and contemplation. Dark smoked oak on the floor runs across the choir stalls and over the walls all around as a unitary area throughout the room. In the center of the room hangs a large golden crucifix, concentrating the eyes of the worshipers. Only a narrow window in the top wall cover lets a thin beam of light fall into the dark room and focuses Christ on the cross. It takes time, a lingering, until the eye slowly discovers a free structure on the black wall: felt blossoms in dark gray and blue, which break through the stringency of the room and gently frame the golden Jesus. A devout place,which resembles the Blessed Sacrament and reads like a modern interpreted quote from a classic chapel.

The focal point of the prayer house is a square where all internal paths intersect and which includes both the foyer and the chic café. Hundreds of light bulbs commute at different heights from the ceiling. An endless counter made of exposed concrete forms the classic reception for the guests, this counter runs seamlessly through the entire room and acts as a counter of the café. In the center of the café there is a massive oak table decorated with colorful spot lights, which immerse the room in a warm and comfortable light and encourage you to socialize. The entire back wall of the café is covered with VIA mosaic tiles and, together with a long bench in front of it, forms the backdrop for small café tables with sunshades. A place that is far from monastic silence, but provides the setting for a relaxed encounter.

Hardly even in a description of the architecture of a building about the toilets is reported. Certainly not when it comes to such a sacred complex. At the prayer house Augsburg, however, there is no way around it. In this case, too unique are these mundane places of human needs designed. If the vestibule to the toilets is still kept in a simple concrete gray and anthracite black, the visitors in each individual cabin will be surprised by a humorous, colorful design. These range from the big eyes of a dairy cow on a camouflage pattern to the Renaissance painting and other interesting motifs.

The prayer house Augsburg forms a uniquely designed microcosm, whose liveliness is completely different from the expectations, which the visitor would expect in advance to a modern monastery. Anna Philipp herself describes the maxim of her designs as follows: "Beauty is like a place that you would never want to leave." And exactly such a place was created in the prayer house in Augsburg.